A new study born out of a Faculty Pilot project funded by the Clinical and Translational Science Institute may offer a new way to screen very young children for Autism. The study, which was published in the journal Autism Research, shows that children with Autism may have inner ear deficiencies that impact their ability to recognize speech. 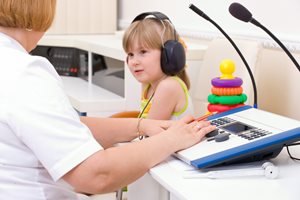 Many signs of Autism, such as social-communication impairments and restricted and repetitive behaviors, are present before age two, but most children with ASD are not diagnosed until age four. Most tests for ASD look for abnormalities in auditory communication and rely on speech to determine these abnormalities. Since speech delays are common among children affected by ASD, these tests are often ineffective.

Anne Luebke, Ph.D., associate professor in the University of Rochester Medical Center Departments of Biomedical Engineering and Neuroscience and study co-author, believes that the hearing test described in the study may lead to earlier ASD diagnoses and treatment, which will optimize the impact of the treatment.

In the study, researchers used speaker/microphone earplugs to measure hearing deficiencies in children between the ages of 6 and 17, roughly half of whom have been diagnosed with ASD. They found that the children with Autism showed signs that the ear was having difficulty processing sounds at a specific frequency (1-2 kHz) that is important for processing speech.  They also found a correlation between the degree of hearing impairment and the severity of ASD symptoms.

Loisa Bennetto, Ph.D., associate professor in the University of Rochester Department Of Clinical and Social Sciences in Psychology and a co-author of the study, suggests that difficulty in processing speech could contribute to some symptoms of ASD. “Consequently, early detection could help identify risk for Autism and enable clinicians to intervene early and correct impairment with hearing aids or other approaches that can improve the range of sounds that the ear can process,” she says.

Because the test is non-invasive, inexpensive, and does not require the subject to respond verbally, the team is currently exploring ways to adapt this technique to screen infants.

Luebke and Bennetto received a Faculty Pilot Award from the UR CTSI in 2010 to study cochlear efferent feedback in Autism.