Lesley Chapman and Molly Jaynes, who are students in the CTSI’s Translational Biomedical Science Ph.D. program, recently received F31 awards from the National Institutes of Health. These individual grants will fund travel and equipment purchases to further their research studies while providing them with living stipends for the duration of the award.

Read more about what Chapman and Jaynes are studying below.

A novel approach to malaria

When it comes to fighting malaria, a deficiency can be an advantage.

That’s what Lesley Chapman discovered when studying mice who were missing a specific strand of microRNA.

“Mice that don’t have this particular microRNA have more immature red cells, so it’s definitely essential for life — you can become anemic without it,” said Chapman, a fourth-year student in the CTSI’s Translational Biomedical Science Ph.D. program. “But therapeutically, if you’re able to target this cell type, you can enhance the host response to malaria.”

The disease, which kills hundreds of thousands per year, is the leading cause of death in many developing countries. Chapman began studying it as an undergrad, when she researched the role of microRNA in red blood cells. As a graduate student, she wanted to take the idea one step further, and was able to show in cultures that if microRNA 451 was altered in platelets, then the cells were able to clear a malaria infection out more quickly.

The next step is to test the results at the next level, by taking the T-cells of mice without microRNA 451 and transplanting them into other mice to see if they have an improved response to malaria.

“This is very novel,” said Chapman. “I don’t think anyone has looked at microRNA in regulating T-cell response during infection.”

Should her hypothesis prove true, the therapy has tremendous potential for humans down the line. Chapman believes that by removing blood from a patient and targeting the proper cells, the modified blood could then be reintroduced into a patient’s body, giving them a much higher resistance to malaria.

Her award, which began on July 1 and spans the next year, will allow her to perform additional tests and travel to conferences that focus on the disease. 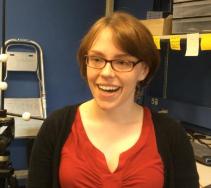 Imagine playing an instrument and then, suddenly, feeling your fingers lurch off in a new direction.

“It’s really devastating, because as a musician, you self-identify with what you do, and then when you can’t do it any more, it alters your whole self-perception,” said Molly Jaynes, a third-year student in the CTSI’s Translational Biomedical Science Ph.D. program.

For several years, Jaynes has been studying focal hand dystonia, a neurological disorder characterized by involuntary hand motions that regularly ends the careers of musicians who develop it.

The rare disorder, as mysterious as it is devastating, has no cure, though Jaynes is working on new approaches to studying it. By having affected musicians execute a series of finger-tapping tasks — whereupon a number appears on a computer screen and the musician must press a button with the corresponding finger — Jaynes is hoping to establish a link between cognitive and automatic muscle control in people with the disorder.

“We want to see if musicians have a problem in that transition,” said Jaynes. “And if we find that they do, which we think they might, it could pave the way for interventional therapies and maybe cognitive rehabilitation strategies.”

Jaynes’s award, which spans the next two years, has already allowed her to travel to Stockholm, Sweden, for a conference on neurological disorders. She’s also hoping to bring her experiment on the road with her and visit musicians with focal hand dystonia in other cities — the rarity of the disease makes it impossible to get an adequate sample size if she only stays in Rochester.